Python has been introduced as an Open Elective subject for 6th Semester BE students under Visvesvraya Technological University (VTU).  The study material for this subject will be shared here. 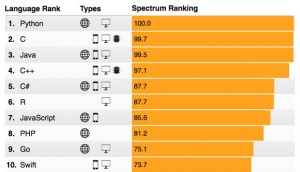 Python is identified as –

Some of the applications of Python are –

Before getting into details of the programming language Python, it is better to learn how to install the software. Python is freely downloadable from the internet. There are multiple IDEs (Integrated Development Environment) available for working with Python. Some of them are PyCharm, LiClipse, IDLE etc. When you install Python, the IDLE editor will be available automatically. Apart from all these editors, Python program can be run on command prompt also. One has to install suitable IDE depending on their need and the Operating System they are using. Because, there are separate set of editors (IDE) available for different OS like Window, UNIX, Ubuntu, Soloaris, Mac, etc. The basic Python can be downloaded from the link:

Python has rich set of libraries for various purposes like large-scale data processing, predictive analytics, scientific computing etc. Based on one’s need, the required packages can be downloaded. But, there is a free open source distribution Anaconda, which simplifies package management and deployment. Hence, it is suggested for the readers to install Anaconda from the below given link, rather than just installing a simple Python.

This entry was posted in Notes. Bookmark the permalink.